How Can I Help My Scared and Aggressive Dog?

We were at a new Home Dog Training client last Tuesday in Lawrenceville working with his family and their nine month old Dutch Shepherd named Oliver.  Oliver was a very attentive dog and slightly high strung.  This is not unusual at all for Shepherds of this age and is something that calm and consistent training can always resolve.  When we begin our first training session with any client, we never immediately engage the dog or puppy in an active way.  W want to “hang back” for a little bit to get a “lay of the land” regarding the dog’s temperament and any active or passive characteristics they may display. 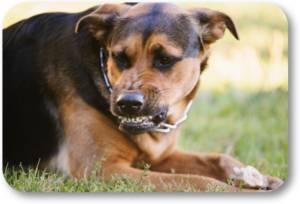 We noticed that Oliver was was taking a passive and slightly timid stance towards us and would verbalize a slight growl as we moved around to change pages of our flip chart or display different training tools.  Although none of these actions were actively aggressive, we were not actively addressing him.  We came to the conclusion that he had some timidity issues that if left unaddressed, could lead to aggressive actions.  When we mentioned that to our client, he agreed and asked how that could be resolved…

When dealing with a timid dog, you first need to address the question of “Why is he scared?”.  Although we could try to go back in time to try and establish a specific event that caused his fearfulness, it is far easer to deal in the “hear and now”.  Most dogs are scared because they believe their immediate environment is dangerous and they may come to some form of harm.  The immediate area is whatever they can currently hear or see.  We could think of this as if we were walking in the woods on a dark night and someone exclaimed “What is that?”.  We immediately adrenalize and often take a slightly cowering stance.  We are unsure and defensive.

This is what Oliver was feeling when Robin and I came into “his territory”.  Who are you and am I safe?  He will eventually understand who we were, but the far more immediate and important issue was if he was safe. Oliver was there with the rest of the family.  With that in mind, if he felt that the family would keep him safe, his question would have been answered in a positive way.  His actions clearly demonstrated that he did not feel that the family could keep him safe.  They were not strong, resolute, and consistent leaders.  He was not willing to rely on their actions to maintain his safety.  Thus, he was cowering and on the edge of becoming actively dominant and possibly physically aggressive.

We noticed that our clients were a little “high strung” when it came to many things around the house.  They would become very active and excited when they thought Oliver was doing anything wrong.  They would push him off the sofa when he jumped up and knocked him down when he jumped on them as they passed by.  They would exclaim “No Oliver”, or “Stop doing that”, or “What the Heck” when they were angry that he was doing something they didn’t like.

We began our training process and quickly explained to them that Oliver is looking for dominant, but passive body language as a sign of leadership.  He also listens for consistent and unique sounds that he can equate to required actions.  Out clients were doing everything but this when they were interacting with Oliver.  He saw them as “crazy with no direction or idea of what to do”.  They needed to change their nature if they wanted Oliver to see them as his leader and stop being scared and approaching aggressive.

Although there are several ways to correct a dog that will allow them to understand that they must focus on you and follow your direction, we thought that a redirection would be best for Oliver.  Since he was already a little scared and timid, the redirection follows the same process as the correction.  The only difference is that it is less physical and allows the client to be in more control of the process.

We told our client to have a leash on Oliver whenever there were people over or they were entering a state where Oliver may become nervous.  This could be when guests come over, the gardener is in the yard with a loud blower or lawnmower, there are loud noises in and around the house, etc. The moment they see Oliver start to react to an event, they should step on the leash, pick it up, and move Oliver away from what was causing him to growl or cower.  They should calmly move him away until Oliver is calm and passively giving them complete focus.

They can then have him do something such as sit. The fact that Oliver is sitting is not important. What is important is that he was now calmly focused on them and obeying a unique and specific command he had been presented.  We like the “Sit” command because that is putting Oliver in a slightly submissive stance.  Oliver would not perform that unless he felt calm in the current situation.  He would feel calm because he believed he was being kept safe by our client.

We also suggested that they always hold the leash when there are guests over.  They can have Oliver right next to them or can easily give the leash a slight tug if they notice his body language starts to become tense.  “Tense body language” is normally characterized by Oliver freezing in place, a slight lowering of the head, tucked tail, and/or focused staring.  This is the time they should tug the leash and have Oliver come back to them.  If he is still tense when he has returned to them, they should walk him away until he is calm.

In performing these actions and exercises, you are constantly communicating to your dog that “everything is fine, you are with me”.  We are sending the same feeling to our dog that we felt as small children when we grabbed our mommy’s hand.  Once we grabbed our mommy’s hand, everything was right with the world.  That is what you are telling your dog.