How Do I Have a Good Puppy from the Very Start?

I was in Marietta on Wednesday at the Verison Phone Store in search of a new phone.  It had been several years since I fully paid for my Samsung Galaxy S7 and I now wanted more memory and a larger screen. I liked the Samsung phone and the Android operating system, so I decided to stay with something along that line.  With that said, I went “all out” and purchased a Samsung Galaxy S22 Ultra. 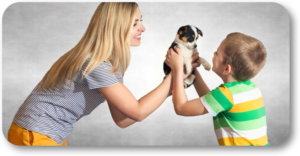 It had all the “right tick marks” and I was sure I would love my new purchase. As anyone who has visited a phone store can easily attest, there is always a lot of “down time” at these stores. You wait your turn, get a salesperson, go through all the paperwork, get things transferred, and ask about all the new features.  During that time, I had plenty of opportunity to chat with the salesperson.

She told me that she had just brought home a ten-week-old Bernese Mountain Dog from a breeder in North Carolina.  Their family loves the new little puppy.  She went on to comment on how much fun they had with the little puppy as he scampered all around their house.  She, her husband, and their young children thought it was great fun to chase the puppy everywhere. They also always would have him on their laps as they were having dinner or on the sofa with them as they were having snacks and watching TV.

She clearly understood that they would ultimately require training for their Bernese Mountain Dog. She then asked me if there was anything they were currently doing wrong that would cause the “down the road” training to be problematic and difficult. Was there anything they were doing wrong?  I looked at her and calmly responded, “Just about everything”.

I initiated my reply by clearly assuring her that her family’s current mistakes are not their fault.  I told her that I have the exact same issue with many of my dog training clients that have just brought home cute, small puppies that are going to grow into very big dogs.  When they are small, my “new puppy” clients love to have them nip at their feet, leap up on their legs, have them chase after them, and many more “high adrenaline” play-time activities.  All of this may be fun and amusing with a ten-pound Mountain Dog puppy, but not when that “puppy” begins to tip the scales at over one hundred pounds.

It is very important to be aware that what you initially teach your little puppy, he will remember as he ages and gets much, much bigger.  For example, if you taught him that it was OK to jump on you when he was a puppy and only ten pounds, he will naturally assume that it is perfectly acceptable to jump on anyone at any time when he is one hundred pounds.

Observation: A little puppy that weighs ten pounds jumping on you probably doesn’t hurt and could be really cute.  A one-hundred-pound dog jumping on you will probably hurt with an eventual outcome that will not be pleasing for anyone. We often refer to these dogs as “out of control dogs”.  They are routinely sent to the local humane shelter because of the bad things YOU TAUGHT HIM.  This is terrible because their actions are not their fault and can be corrected.

So, what were some of the things I told my salesperson while waiting “with bated breath” for my new, really cool phone?

As you are preparing your puppy for their initial training classes, it is important they have the tools to learn.  The biggest tool is the ability to be calm and give appropriate focus.  The above suggestions simply help you direct your new puppy to be calm and well-focused.  That will make them great students and ready to learn.

Please call Robin or me at (770) 718-7704 if you need any dog training help.  We are blessed to have been your local dog training professionals for over eighteen years.  We have trained over 6,000 great dogs and loving families and are ready to help you.