What Must I Do to Assure a Safe Walk With My Dog While Visiting Relatives at Christmas?

Last Thursday I was at a Home Dog Training session in Woodstock training a new client and her eighteen month old Labradoodle, Shadow.  At eighteen months, many Labradoodles still act as if they were puppies, so Shadow was still exhibiting a lot of naughty issues such as jumping, barking, not paying attention, stealing food from the table, and getting on the furniture.  Shadow responded very well to the training and we had the problems in hand pretty quickly. 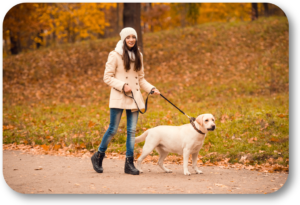 As we were wrapping up the session, I asked if my client had any more questions.  She thought a moment and said that she did.  She was going to visit her mother in North Carolina and was wondering if she should do anything different when walking him there than around her local neighborhood.  Shadow was normally “a pretty good walker” and was fine when they went out around the neighborhood in Woodstock.  She wasn’t sure how he would be when they were at her mother’s house in North Carolina.

I was excited that she had asked this question because it indicated that she “understood the canine behavioral concept” of being Shadow’s protector, leader, and friend.  We didn’t work on walking during the training session because, as mentioned above, Shadow was a pretty good walker around the local neighborhood.

I told her that since Shadow already knows how to walk with her, the simple action of walking will not be the issue she needs to address when at her mom’s.  The main issue that my client will need to address is to maintain her leadership while walking in strange surroundings. She needs to communicate to Shadow that she is still his leader, protector, and friend.  This is done by making sure that Shadow always feels safe and constantly gives her focus in any situation.  I reminded my client that she had already accomplished this when she began walking Shadow in her current neighborhood.  She simply needs to quickly repeat the same actions when she arrives at her mother’s home in North Carolina.

I proceeded to give her some tips she should implement when she got to her mother’s house:

I then gave her one last, universal piece of advice.  She should always be scanning the immediate area for things that may place her or Shadow at risk.  Even if she thinks “Oh, that might not be too bad”, she should change direction and avoid the situation.  Shadow doesn’t care that you are taking a route that is different than the one you had originally picked. All he cares about is feeling safe while with you.

I also suggested that when she starts walking Shadow, they don’t go on the full walk the very first time.  Start out by only going for a third or half the full walk.  Turn around and then go back to her mom’s house.  This will get Shadow most of his exercise and will allow her to practice her “dress rehearsal” for the entire walk.  She will be able to see if there is anything that Shadow is doing that she forgot to take into account.  She will have a far better opportunity to maintain control of the situation and affirm her leadership and ability to provide safety to Shadow.  Once she feels comfortable with the situation, they should be ready to go for the entire walk.

She should take a “walking stick” with her.  Even though she has checked the entire route out and everything looks fine and even though Shadow has already shown that he is secure in her leadership, you never know what might happen.  If something does happen, she can waive the walking stick in the air or pound it on the ground or a tree to stop or redirect an aggressor from her and Shadow.

I reminded her that her goal with Shadow in North Carolina is not to have the entire neighborhood love and play with Shadow.  She should not feel obligated to allow every little child to come up and play with him.  Her goal is to make Shadow feel safe while with her. Sometimes that just doesn’t take place in a crowd of strangers.  Shadow is a great dog and with these simple suggestions, I assured her that they were going to have a great time.

Keeping your dog safe is your most important role as his care giver, provider, and friend.  Taking a little extra time to make sure you are in charge of the situation will easily make this happen.