What Can I Do When My Dog is Afraid and Aggressive towards Other Dogs?

I was in Kennesaw yesterday working with a new Home Dog Training client and his Bull Terrier, Wilma.  Wilma’s most pressing issue was her jumping on the furniture and stealing food.  We were able to fix these inappropriate behaviors in short order and moved on to Wilma’s other issues of not listening and bolting out an open door.  We were making excellent progress on these issues and solved all of them after a rather long, but very productive lesson. 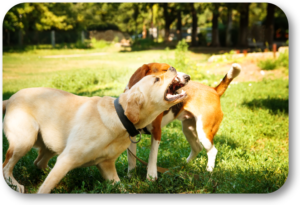 My client was very happy with the results and looking forward to practicing the processes we put in place. As we were finishing up, a friend of my client stopped by and had a dog training question for me.  His dog is very aggressive towards other dogs and he asked me if there was anything he could do about it.

Dog on dog aggression can be triggered by many existing or prior issues.  Because of that, I asked my client’s friend if he could further elaborate.  After some “careful digging”, I picked up on some crucial points about the friend’s dog.  I learned that he was from a rescue group and had been passed among multiple families before my client’s friend adopted him about ten or twelve weeks ago.

My client’s friend thought it would be a great bonding experience to take his new dog to a dog park to play and “he thought” feel safe and happy.   Well, that didn’t work out too well because his dog got into a big fight with several other dogs at the park. He then took his newly acquired dog to a doggy day care where he thought his new dog could play and be happy.  He was told by the doggie day care providers that his dog became very agitated, and they had to keep him separated from the general population.

Whenever we rescue a dog, it is impossible to know what their prior life experience may have been.  Because of this, we should not spend a lot of time trying to figure out what previous experiences “may be triggering” their current behavior and mannerisms. We should spend the time focusing on their current issues and understanding what we can do to try and mitigate them in the “here and now”.

The bottom line is that my client’s friend’s dog is afraid of other dogs.  Also, because he has been passed around among multiple families (packs), we can assume that he has not created a steady level of safety and security.  Although this issue often reveals itself in aggression towards people, it can also take place with a dog displaying inappropriate and sometimes aggressive actions towards other dogs.

What we need to do is to strengthen his dog’s sense of security when he is around other dogs.  We also need to create a consistent environment that allows the dog to understand that there is a leadership figure that is always there to protect him. This would be the figure “who has his back”. (In the “dog universe” this is the “alpha pack leader”.) I suggested the following exercise to start the process:

I suggested that the friend repeat this process for at least three to six weeks to build up a reliable experience based on repetitive behavior.  By taking the process slow and always having them on leashes with the ability to move away, if needed, it gave the friend a heightened sense of safety and control.  This is a critical factor in reestablishing his dog’s sense of security.

Please call Robin or me at (770) 718-7704 if you need any dog training help.  We are blessed to have been your local dog training professionals for over seventeen years.  We have trained over 5,000 great dogs and loving families and are ready to help you.