What Toys Are Bad for My Dog or Puppy?

When it comes to doggie toys, it is important to understand that the type of toy and how you interact with your dog with the toy can have a large and lasting impact on your dog’s behavior.  This came to light last week when we were in Lawrenceville working with a new Home Dog Training Client and her six month old Bull Terrier. She told us that her puppy used to be great, but he recently started to become more and more headstrong and even aggressive.  She loves him and is always playing with him, but he is just becoming “annoying”.  Why is this? 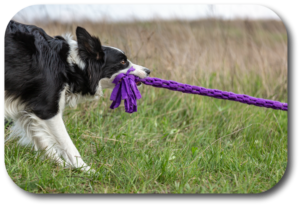 After a short discussion, we found that even though she received tons of gold stars for loving and playing with him, there were some basic things she was doing incorrectly.  And, guess what, they related to her “playing techniques”.  She said that she and Mr. Pickles (that is the Bull Terrier’s name) loved to play tug of war with just about anything and he loves the squeaky toys she gets him from the pet store.

The first problem was the tug-or-war play activity…

Many people love playing tug-of-war with their dogs. Your dog pulls and growls and you pull back and laugh. This can go on for a pretty long time. Sometimes your dog will get the tug-of-war toy and run around the room while you chase him. You often end up with the tug-of-war toy and then make high pitched sounds encouraging your dog to jump and grab the toy again. Wow, isn’t that a lot of fun!

Now, do you wonder why your dog jumps, barks, and nips at people?

Dogs learn through repetition. When you constantly play tug-of-war with your dog, you are playing a game that includes the actions of biting, jumping, and barking. Oops!

So what does all this tell you?

The squeaky toy that you “harmlessly” give your dog can often cause aggression and heightened adrenaline.

Yes, I know that it is fun to give our dogs these toys and see how excited they get.  They growl at it, shake it in their mouth, bark at it, and run around the room.  As I said before, that is so entertaining to watch and many times it is just really funny. Do we have any idea what is going through our dog’s mind when that is going on? Do we know what we are teaching him?

Let me give you a little hint. The squeaky sound that the toy is making is very similar to the sound of a wounded or dying animal. You have thrown this “animal” to your dog and given him the “thumbs-up” to maim or kill it. Does that sound aggressive to you? (I hope so; if not, we have many other issues to discuss…)

In continuing this, you are promoting aggressive behavior and providing a repetitive situation that is part of the dog’s natural learning process. You must limit or eliminate all squeaky toys and replace them with toys that otherwise stimulate your pup’s mind and directs his focus in a manner that is acceptable to you.