How Do I Keep My Dog Back When Holiday Guests Are At the Front Door?

I was at a new Home Dog Training client in Decatur the other day working with their Jack Russell named Wiley.  Wiley would never listen to our client, loved to jump on everyone entering the house, and would always steal anything that was on low tables.  I told my client that Wiley thought he was the boss of the house and everyone else was there to “do his bidding”.  We were going to fix that right now. 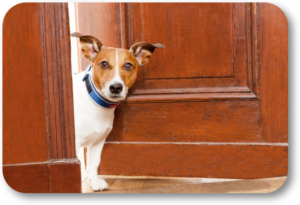 Within a few hours, Wiley was giving my client and his family the focus and respect that they deserved. He now understood that he was not the boss of them.  They were very happy with Wiley’s “new understanding of the family dynamics”. As I was finishing up, I asked my client if there was anything else we forgot to cover or anything he had remembered about Wiley’s behavior that needed to be addressed.  He thought for a moment and then recalled that over Thanksgiving, Wiley ran to the door every time a new guest would arrive, jumped on the guest, and then ran out the front door to explore the neighborhood.

Wiley had not done this before and his “door actions” caught them by surprise. Their initial solution was to lock Wiley in the back room when guests would arrive.  They wished that he could be there with the rest of the guests and wondered what they could do…

I started my answer by explaining that dogs running out an open door is a very common and annoying problem that most of our clients experience.  The “door fiasco” can be very hazardous around guests, is a safety hazard when the dog runs out the door and is just darn right embarrassing.  So, what is going on here?

Robin and I like to tell our clients to envision the world through their dog’s eyes. The dog is constantly watching their body language to try and figure out what they are saying and what they are allowing him to do. We always teach our clients that a large portion of body language is posture.  One aspect of posture is dominant focus.  Are they facing their dog or do they have their back to their dog?

This submissive stance by our client will cause their dog to stop focusing and assume that they are now the ones in charge.  When they sense that someone is at the front door, since they “are in charge”, it is their responsibility to go to the front door and display a dominant stance.  This is translated into all the jumping, barking, nipping, and “exploring” beyond the front door.

What our client needs to do is to, in no uncertain terms, communicate to Wiley that they are in charge and they will “deal with whatever is at the front door”.  The important thing that they need to remember is that they must communicate in a way that Wiley will understand and obey. I provided the following exercise for them to practice before the Christmas guests arrive:

As you can see, my client has remained in charge of the situation from the time the doorbell rang until the time his guest has greeted Wiley. Wiley has remained polite and respectful during the entire process.

One more thing.  Remember that I mentioned to have the leash and collar on Wiley during this exercise.  These are used as a “safety backup” if Wiley suddenly tries to run out the open door. If this happens, my client can quickly step on the leash before Wiley gets through the door. He can then direct Wiley back into the house away from the front door and continue the exercise.