Why Is My Dog So Crazy?

I was at a new Home Dog Training Client in Decatur last Monday working with him and his two-year-old Dalmatian named Nitro.  Nitro was my client’s first dog and he was the first to admit that he had no idea to do regarding Nitro’s training.  I asked him how he decided on a Dalmatian and he said “I just like how they look”.  He had no idea how energetic this breed can be. I first let him know that we were going to turn Nitro into a loving and respectful dog, but he had to understand that the task was “more uphill than with most other dogs”.  He was willing to accept that because he had grown exceedingly fond of Nitro and Nitro, in his crazy way, had shown that he loved my client. 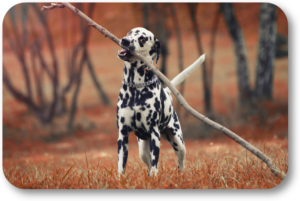 My client then confessed that he had been getting very adrenalized when Nitro would do bad things and wouldn’t listen to him.  He never hit Nitro, but he got pretty animated.  He was constantly telling Nitro “Stop it”, and “No, No, No” and it appeared that Nitro was simply deaf to all his communication.  He was glad that I had assured him that we were going to convert Nitro into a wonderful member of the family, but wondered what sort of “magic” needed to be deployed to make this happen.  How is Nitro going to become focused and respectful?

I explained to my client that he is experiencing a common occurrence that takes place with many of our clients.  From his perspective, and from the perspective of many of our clients, their dog is the crazy one.  They see their dog as the instigator and, more importantly, perpetuator of the bad behavior.  They believe that everything they are doing, and that goes with my current client as well, as actions that should diffuse their dog’s intensity.  If their dog were a human, they might be correct.  The problem is their dog is a dog.  Wow! That sounds pretty obvious, but you would be surprised at how many dog owners would completely disagree.

So, let’s get back to the “crazy stuff” and how we “humans” can calm our dog down…

There are several things that we need to remember.  The first thing is that dogs are pack animals and need a hierarchy to feel safe. This can be directly equated to how we felt as young children and always feeling safe with our parents.  With that said, our dog needs to identify and constantly affirm that “the leader” is still “the leader”.  They often do this by testing us.  We can equate this to a “pop quiz” of leadership.  Our dogs equate “the leader” as the one who gives the orders.  The leader will tell everyone what to do.  If the rest of the group follows the leader’s directions, that dog is obviously the leader.  That is it, no discussion, that dog is the boss.

So what does our dog do?  He will instigate something to see if we will respond and follow.  These are normally physical actions. Our dog may jump on us for a pet, bark at us to follow him to the door, steal the clicker and run off under the assumption that we will chase him.  These are all active and often dominant actions that our dog will instigate to make to see if we are the leader or if he is the leader.  If we respond, he is the leader.

The problem is that we almost always actively respond.  This sends two signals to our dog.  The first signal is that if he thought we were the leader, that is no longer the case.  There has been a “change in management” and he is now the boss.  The second, and more “annoying signal” that we have unknowingly sent to him is that he can now do whatever he wants and get us to do whatever he wants.  These are two signals that will allow him to be more adrenalated and pay no attention to us.  From our point of view, he is crazy.

If we stopped all our actions right here, we might still have a chance to calm our crazy dog.  But as our client (and you) probably know, this is not the end of the story.  We now get mad and start to “yell and chase”.  Remember what I said earlier about being humans and not dogs…

When we were kids and did something wrong, our dad would normally yell at us by saying “Bad kids, that is wrong! Stop it now! This is your last chance!”.  This communication from our dad clearly let us know that we were now on “really thin ice”.  This encouraged us to stop and surrender.  If we were “hard heads” or “little devils”, we would just keep running.  From our perspective, our dad was still the dominant figure and we were trying to get away from the punishment we were going to get and rightly deserved.  We understood that we were in the wrong and not the dominant players.

When we yell and scream and chase our dog, we are sending a very different signal to him.  This is why it appears that “he enjoys when we get mad at him”.  Well, this is weird.  Is our dog like all those unsubs on Criminal Minds?  No.

The answer lies in the hierarchal nature of how our dog communicates and how we communicate.  When we are “getting mad at our dog”, we are verbalizing “stop do this” to him.  We are also probably flailing our hands and chasing after him.  Since we communicate mostly through verbalization, the chasing and flailing, although present, are nowhere as important as our verbalization of “stop it commands”.

Our dog focuses far more on body language than verbal interaction.  He sees us chasing him and flailing our hands and interprets that as play.  Since we had just responded to his jump, nudge, or bark; we had already given him the signal that he was the boss.  This had already put our dog in a play mode.  The physical actions that we are now providing are telling our dog that the play should continue.  Since he had started the interaction, he simply ramps things up and takes it to the next level.

The jumping continues. The barking gets louder, He becomes more active in getting you to the door. You really have to chase him to get the TV clicker back.  As you get increasingly angry, he sees that as wanting to play more. This is a vicious circle that never ends well.

So, what should you do?

The answer is very easy to explain and exceedingly difficult to implement.  The answer is to be calm and to keep everything on your terms.  Do not respond to your dog when he wants you to pet him. Do not excitedly run after him when he grabs the clicker.  Do not follow him to the door to let him out when he tells you.  Make sure that all your interactions can be based on “I want my dog to do this.”  When it is your idea, you are the boss.

Second, don’t get crazy and animated if he is making you mad.  This only adrenalizes him and encourages him to “do whatever he is doing more”. Stay calm and collected. This will allow you to “keep your wits about you”. You can calmly determine what to do next and to weigh your options.

As you don’t respond to your dog, he will naturally focus back to you. As you are staying calm and still, your body language is delivering a sense of confidence, resolution, and leadership to your dog.  This naturally keeps him calm and more submissive towards you.  To be sure, you are doing nothing that is frightening or intimidating your dog.  As I said earlier when I mentioned the “safe feeling” we had when we were with our parents, you are now sending that same safe and calming feeling to your dog.

Remember, this all sounds really easy.  Just be calm and do not react.  But, in real life, it is really, really hard to do.  It will take some practice, a lot of mistakes, and a whole bunch of times where “that little voice in the back of your head” is telling you to “take a chill pill”. But remember, when you can finally do this, you will no longer have a crazy dog because you are not making him crazy.