Should I Train My Dog Myself or Send Him to Board and Train?

A few days ago, Robin received a phone call from a prospective Home Dog Training Client.  She lived in Lithonia and had a two-year old Welsh Terrier named Black Jack. Black Jack loved to jump on people, would be a real pain at the front door, was terrible on a walk, stole food from the dinner table, and never listened to anyone.  She had seen several Board and Train Facilities in the area and was wondering if we also offered a board and train option.  Although she told Robin that she worked from home and had plenty of time for Black Jack, she thought that “sending him off” sounded like a good idea… 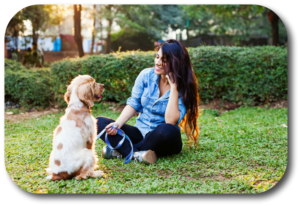 We get many phone calls from people thinking about sending their dog off to a Canine Board and Train Facility to have the Board and Train trainers teach their dog. This would be pretty easy, but is it is really a good idea?  If the owners aren’t the ones training their dog, will their dog be good for them when he comes home?

I want to tackle this question by coming at it from another angle.  First, the reason that I hope most people get a dog is to have a relationship of unending love and complete trust. They want their dog to know what is right and wrong. They want him to respect them as his care giver and universal protector.

This can only be accomplished with a lot of face time between the dog owner and their dog.  When he does something that is wrong, the owner needs to clearly let him know that what he did was wrong.  The owner also needs to bond with his dog by hanging out together, playing, and just building a relationship of trust.  He can never do anything that would scare, frighten, or hurt his dog.

The owner needs to provide stimulating activities that will teach his dog the actions he should perform.  He may require his dog to “come” when he needs his dog to be by his side. It is important for his dog to “sit” when he needs him to be calm and respectful.  His dog should “stay” so that his dog will remain safe when he answers the door.

It is critical that the owner’s dog understands that whatever his owner asks him to do or wherever his owner takes him, he will be safe.  If there is ever a situation where the dog may feel that his safety is in question, he will look towards his owner to resolve the situation.

If the owner can do these things, he will have a great dog.  He will have built the bond, trust, and respect that is needed for their relationship.  This can only occur if he is his dog’s teacher. He must be the one in charge.  He must be the one that is always guiding and showing his dog the proper direction.

Sending his dog off to a Canine Board and Train Facility with someone else doing the training just doesn’t accomplish what needs to be done.  The relationship between his dog and himself is his responsibility.

Before I leave you, let me throw in one small twist to this story.  If an owner sends his dog to a Canine Board and Train Facility but can then follow up on the training received during the Board and Train program, the proper relationship may be established.  If there is a meaningful and educated handoff between the dog’s time at the Board and Train Facility and his return home, the training and direction that was initially established should be continued.  The key difference is that the owner is now the teacher earning the respect and building the appropriate bond. The problem that Robin and I have seen over the years is that this often does not take place.